President’s Award
The President’s Award is also known as the “Just Do It!” Award. It is presented by the President of the League to recipients in each category of membership (Provisional, Active, Sustainer) as based on their outstanding levels of volunteer service demonstrated throughout the year.

Founder’s Award
In honor of the first President of the Junior League of Annapolis, Inc., the Founder’s Award is presented to an Active League member who has demonstrated outstanding commitment to JLA. The recipient evokes the spirit of voluntarism, demonstrates a willingness to serve the League and community, and has the ability to inspire others. The award is given annually, when merited, by the President of the League.

Excellence in Voluntarism Merit Award
The Excellence in Voluntarism Merit Award was initiated in 1992, and it is presented every spring to celebrate women who make a difference by serving their community. This award program honors women in Anne Arundel County who perform volunteer services for others in such areas as family support, mentoring, the arts, education, the elderly, drug and alcohol abuse, environment, hospice efforts, disabled citizens, multicultural groups, civic associations, etc. All nominees must live in Anne Arundel County. The honoree receives a silver Revere Bowl, and the organization she assisted receives a cash donation from JLA.

Janus Award
The Janus Award is presented to JLA member(s) who have done something extraordinary that will serve to sustain JLA in the future. It is named after the Greek God, Janus, the mythical god of beginnings and endings. Janus had two faces: one for reflecting on the past and the other for looking into the future. This award is a special award and was first presented during the 2000-2001 League year. The JLA President selects the award recipient(s) each year.

Jennifer Summers Barrett Award
Jennifer Summers Barrett epitomized a strong, dedicated JLA member who cared deeply about her community, especially our children. Jenn understood the importance of literacy in our youth, reminding us all that children are our future so we must take care of them as we would our own. She established the Talk, Play, Read program, which brought our volunteers to underprivileged neighborhoods to read to children and show parents how to encourage a love of reading. Jenn’s legacy lives on through the Jennifer Summers Barrett award as a reminder of her hard work, positive light and the importance of caring for each other—especially our children. This award is presented each year starting with the 2015-16 league year to the JLA member who, according to the membership, best embodies the legacy of Jenn and a dedication to truly improving our local community.

Women Building Better Communities Award
This award is given to the committee that best worked together as a team to collaboratively accomplish their goals. By recognizing the valuable contributions and individual gifts of each member, supporting one another, and working well together, they contributed to the JLA mission and demonstrated the power of Women Building Better Communities.

2021 JLA Award Recipients
The President’s “Just Do It” Awards:

The President’s “Just Do It!” Awards: 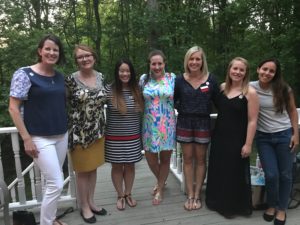