Some days you’re the windshield. Some days you’re the bug. March 28th did not start out so great. My 17-mile commute to work took a whooping hour and nineteen minutes. I pulled my parking garage entry ticket at 8:59; just under the 9:00 am cut off for the early bird parking rate.  Maybe I had a little bit of luck going.

My day was fairly uneventful. Which was a relief. I had Cash Bash that night! Since I had gotten in late, I wasn’t leaving as early as I had hoped.  In theory, the 30 miles from Baltimore to Annapolis should take 35 minutes. The reality in rush hour is very different. Given my morning commute, I was not holding out hope that leaving at 5:30 I would make it by 6:30. And I needed gas. Ugh. I had a cushion, 7 p.m. was he cut off to pull your corks. But oh that unpredictable element traffic. Luck be a lady.

I said a little prayer as I pulled out of the garage. To my amazement, I breezed through the surface streets with zero sign of big city rush hour pitfalls. As I pulled into the gas station I thought, “yeah baby this is my night.” And then, not so much…

The gas station was a crazy! Pumps out of order, people jockeying for working pumps from all angles. All gas station etiquette and decorum out the window. Myself included. Nearly 20 minutes later, I had a full tank of gas and I was back on the road. Complete with grumpy stripes and a “this isn’t going to end well attitude.”

Bracing for the worst as I merged on route 295, I was delighted to find it went smoothly. As did routes 695, 97, 50…and I found myself pulling into the parking garage at Union Jacks at 6:22 p.m.

All thoughts and feelings I had about the day fell off as I walked into Union Jacks.  Two corks. Two chances. Numbers 73 and 12. Had no particular vibes about them too focused on the good eats, drinks and friends that were awaiting me.

As we ate, drank, talked and laughed. Numbers started to be pulled. People dropped their corks into the second chance raffle bowl with varying reactions. None of it really mattered. We were having fun and raising money.

Final five and I’m still alive. We all come to the front. It’s getting more serious now. Four. Still standing. Three. Still there. And then were two.  Oh my. Was this real? My spidey senses were a flutter. Was it really my night? Do you I go for it? Or do I play it safe? A bird in the hand is worth two in the bush. I turned to the member next to me and asked a simple question: Split it?

Luckily, she agreed. We both walked away winners. I have a new affection for the number 12.

Luck may be a lady, but when women work together and support each other, we all win. 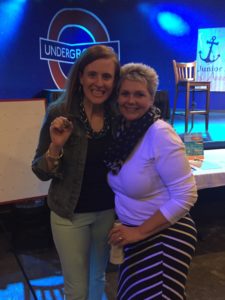