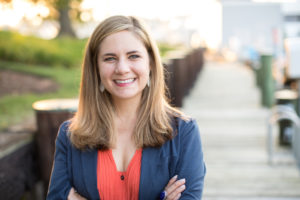 Sarah Jane is the founder of design and website firm Sarah Jane & Co., and the voice behind the humorist parenting site, Mommy Has Struggles. Originally from Annapolis, Sarah Jane graduated from the University of Alabama with a B.A. in Communications. After school she moved to Seattle where she initially worked in the paper and printing industry and started her Junior League career. She also served as a member of the King County Search & Rescue ground team and mountain rescue teams. She eventually returned to Annapolis and married her husband, who she refers to anonymously as The Beau on social media. They have a three-year old daughter, Mae. After spending the last two years in DC while her husband attended graduate school, Sarah Jane is thrilled to be back in Annapolis and serving again on the Board of Junior League as Member-At-Large.